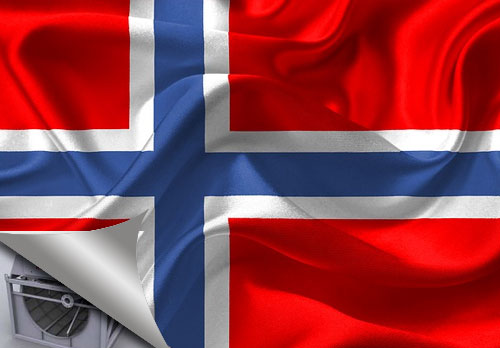 The leading group in Norway, NorTekstil Services has laundries operating all over the country, from several hundred miles inside the Arctic Circle to the southern capital of Oslo.

Just outside Oslo in the city of Drammen is their flagship laundry, which was originally built in the early 2000’s to a standard of design and equipment that set a new Benchmark in the Norwegian Textile Industry.

The plant combines a 2 tunnel linen processing plant for commercial and hospital linen with facilties for industrial uniforms and dustmats, making it a true ‘all purpose’ plant.

As with all laundries in Norway, incoming cold water temperatures are low – in winter between 2 – 4 degrees – which places additional pressure on the already high costs of energy. For this reason, the plant was designed from the outset to have waste water heat recovery. 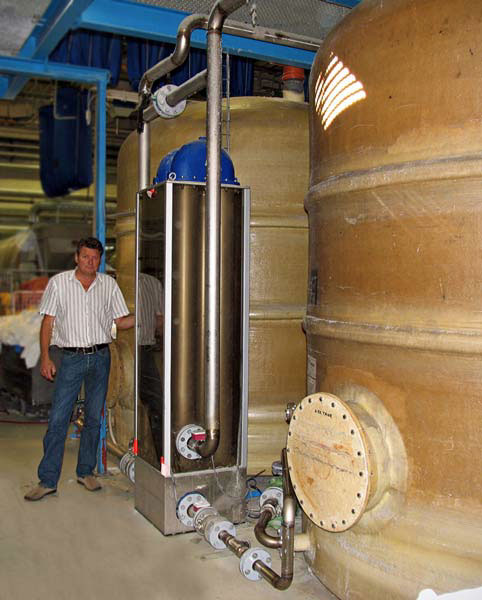 Plant Manager Per Frøge with the new Aquatherm V20 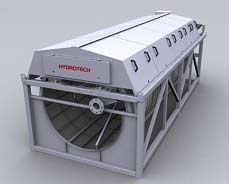 All waste water is collected and pumped to a Swedish built Aquatech drum filter unit. which filters down to between 40 – 80 microns.

The filtered waste water is then stored in one of two large reinforced fibreglass storage vessels.

When the plant was originally commissioned, the hot waste water was pumped through a commercial plate exchanger with the intention of preheating the incoming cold water.

After a short period, the performance of this system dropped off dramatically and it was discovered that the plate exchanger was blocked. After stripping down and cleaning, the performance returned to normal, only for the same to recur a few hours later.

The idea was of course right, the technology was not. Even fine particles of lint will accumulate in the sharp corners and edges of a plate exchanger and lead to a drop in performance followed by blocking.

The leading chemical supplier to the laundry industry in Norway at the time, Lilleborg A/s advised NTS to make changes to their system which were to have dramatic results. The plate exchanger was changed for a new Aquatherm V20 and the pipework was altered to eliminate the recirculation of cold and preheated water, which reduces thermal efficiency even if the exchanger is working perfectly.

Immediately after commissioning, NTS reported a saving of 500 litres of oil a day – every day – with fresh water being heated to over 50 degrees and waste water being cooled to below what is required by law for discharge to the public drains – a limit which has now been reduced to 20 Degrees Celsius.

8 years later, fully paid for from savings many times over, the unit continues to self clean without the daily intervention of the engineering department.

Cooled effluent, with a high pH and residual washing chemicals is now used for mat washing, making further inroads into the cost of service to this successful plant. In mid 2010 an extension to the laundry with 2 additional CBWs took place, with 2 more Aquatherm units and Lilleborg’s own system of water recycling making this one of the most efficient laundries in the world in its use of water and energy. 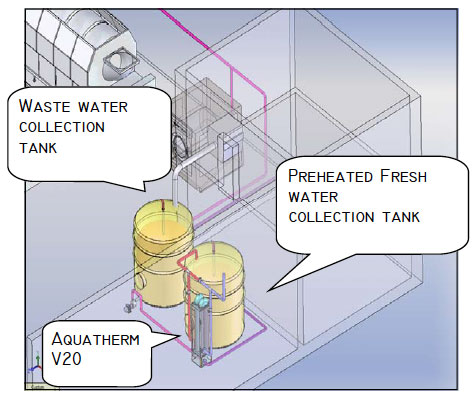